The NetSource team had great success this year at the Greater Ocala Advertising Federation’s ADDY Awards gala. Our designers and programmers were recognized with 4 awards, including a Best of Electronics award, 2 Gold, and 1 Silver. 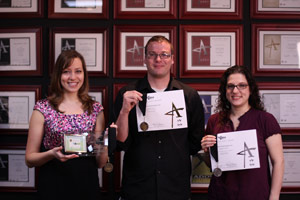 Continuing a ten year tradition of recognition, the NetSource team received awards for Interactive Media and Logo design this year.  Our first award for the night was a Gold Award in the Interactive Media, Website, B-to-B, Services category, and it went to Christie Heikkinen and Alan Cece for the Trish O’Sullivan Design Group website, www.trishosullivandesign.com.   In the Interactive Media, Website, Consumer, Products category, Jamie Embree and Lee Simpson were recognized with a Silver Award for the Squeakers website, www.squeakers.com.  Our work for Squeakers was also rewarded with a Gold in the Elements of Advertising, Logo category for designer Jeremy Jones.  And finally, the Trish O’Sullivan website was singled out with a Best of Electronic win.

Held this year on February 17th at the Courtyard Marriott of Ocala, FL, the Ocala Ad Fed’s ADDY Awards gala is an opportunity for the local creative and marketing community to recognize outstanding work in print, interactive, broadcast, and mixed media campaigns.  Each Silver and Gold award recipient will advance to the Regional competition (one of 14 in the nation), and then those winners proceed to the national level.

The ADDY awards honor excellence in advertising and cultivate the highest creative standards in the industry. With around 60,000 entries annually, the ADDY awards are the nation’s largest advertising competition.  Each fall, the competition begins at the local level of the 210 American Advertising Federation member clubs.  Winners demonstrate the uniqueness of the ADDY Awards. Their work is significant in that it has not only received national honors, but is also recognized at the local and regional levels.